It is with bitter-sweet emotion that we say farewell to long-time Santa Maria employee, Pat Mattingly, who retired this June. Pat began working for Santa Maria on August 26 of 1974 as a clerk-typist for the Youth Service Project, now the Youth Development Program.

Throughout the years she worked as a community organizer, a food pantry and daycare coordinator, and most recently as a Business Assistant working with accounts payable. On October 31 of 1994, 20 years after starting with Santa Maria, Pat retired. Within a year, Santa Maria reached out to Pat regarding some part-time work answering phones and assisting with a few other jobs, and Pat found herself working for the agency for another 17 years. Pat was very passionate about her work with Santa Maria because of the people—both her colleagues and the people the agency serves. Pat mentioned that if she had not worked for Santa Maria, she would not have met so many people throughout her life. Working for Santa Maria connected Pat to people and to the good in the world. She finds that Santa Maria and the programs it offers has grown immensely and reaches out to many more people than when she started. When asked what she liked best about working for Santa Maria, Pat stated, “Meeting people, making friends, and volunteering for events.”

Pat, a mother of 7, grandmother of 32, and great-grandmother of close to 20, is enjoying her retirement by spending time with family. “I just want to thank Santa Maria for all the years and for putting up with me,” joked Pat. Blair Schoen, Santa Maria Community Services Vice President, stated, “From the very beginning of my long career at Santa Maria, I thought of myself as a member of Pat’s extended family. I believe Pat’s children thought of me as a big sister or an aunt in the early days, and Pat helped me become part of the Youth Service Project and ultimately, the Lower Price Hill community. I have cherished our connection of our almost 40 years.” 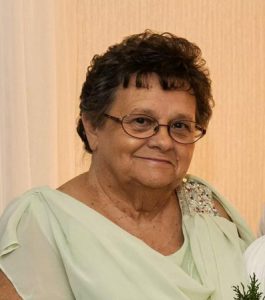