“I can’t stop my life because other people are negative.  I want to stay positive.  For me it is a positive choice to be in the program and not a sacrifice,” says Tiffany Woody, mother of three year old Katlyin and a client of Santa Maria’s Every Child Succeeds Program (ECS).

Tiffany came to Santa Maria’s ECS Program when Katlyin was two weeks old – a nurse who was visiting her, recommended the program.  Tiffany joined the program, because she wanted to find resources for Katlyin and herself to make sure the little girl was on track with her development: motor skills, language, social/emotional, intellectual and language.  The program has been inspirational for Tiffany since then.  Katlyin learned counting, rhyming, communication skills.  The three year old can now assemble a

63 piece puzzle faster than her parents!  Tiffany describes Katlyin as very bright, beautiful, willing and open.  “She warms up to people quickly, but at the same time is aware of strangers and is alert,” says Tiffany.  Tiffany and Katlyin have also enjoyed the groups that the ECS Program offers once a month.  When Katlyin plays with other kids during these groups, Tiffany teaches her to share and be nice to others.

It’s amazing to see how Tiffany has transformed a long way from having a rough, abused childhood to being the mature, goal-oriented, sharing and positive woman she has become.  “She is very self motivated,” says Barb Smith, Santa Maria ECS staff member, who worked with the family for two and a half years.  “She always seeks opportunities for her and Katlyin.  She has cerebral palsy but has not let that be an obstacle in her life.  She pursued an education, has applied for jobs, had her child in daycare, walks or takes a bus to all appointments: to the grocery, bank, doctors’ appointments.  She is very proactive when it comes to her child’s development.  Whenever we had an activity that Katlyin struggled with, she would practice between visits to help the baby accomplish it.  Tiffany and Katlyin’s father have been together for several years, and she is currently pregnant with her second child.  She is a go getter!”

Tiffany wants to be an inspiration to her daughter, and wants Katlyin to inspire other people in turn.  She is extremely organized and differentiates between her short-term (raising a child, paying the bills) and long term goals (sending Katlyin to college, buying her first house).  Katlyin’s parents have even opened a savings account to begin saving for Katlyin’s college education.  Tiffany also has a counselor and has a deep understanding of how therapy is helping her.  For a young woman, who has been completely on her own since 18 after having a rough childhood, she is very mature.  “Katlyin’s father has helped me come a long way.  He steered me in the positive direction.  He taught me the importance of saving money.” 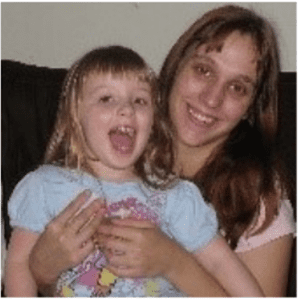