Santa Maria has the privilege of being part of the East Price Hill Mural Project through ArtWorks Cincinnati and Price Hill Will. A team of 15 people including one project manager, two teaching artists, two lead artists, and ten youth apprentices, will be leading these five murals including one on our 3301 Warsaw Avenue building. The lead artists, Lizzy Duquette and John Lazador, designed the murals with the purpose and goal to create a narrative about the community and residents of East Price Hill and amplify impact by establishing a meaningful visual.

The murals will be implemented from June 12th to August 4th and along with the murals going up, there will be five community engagements, (four of which have already taken place), that get the community involved by creating art related to mural themes with the lead artists. The apprentices and teaching staff are also present at these events to help facilitate and engage community members. Bringing the community together is meant to bridge cultural divides to build empathy and deepen cultural understanding. These murals will not only create an enjoyable atmosphere in Price Hill, but also tell stories and build cultural unity.

Each mural was designed according to the communities’ responses to the changes and inspirations they want to see in their neighborhood. Each include different objects and pictures to symbolize something that is part of the community and important to the people in the neighborhood. The mural being painted on Santa Maria’s building includes a variety of different pictures and symbols representing the East Price Hill neighborhood and the residents within it. Some of the things the mural entails are a sunflower which symbolizes peace and hope, a football which symbolizes the neighborhood kids who practice in the streets, monarch butterflies which represent change, freedom, and immigration, and many more. Each symbol is a reminder to the community about the changes they want to see and the importance of their community. We are so excited to see the final results of this mural project and how it’s going to impact the people of Price Hill. 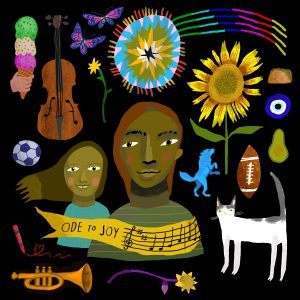