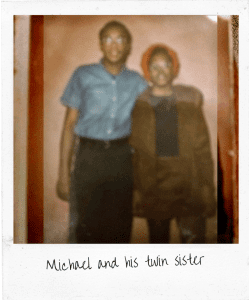 Services helped make his life better. He recalls moving to the Findlay Market area from the West End in the early 1960s. At that time, Santa Maria was still located in Over-the-Rhine near Findlay Market. Michael used to come to Santa Maria with his whole family, including his twin sister (pictured on the right), with whom he was very close. Family was the most important part of Michael’s life and he was happy to be able to share his experiences at Santa Maria with them.

Michael began working at Findlay Market by selling shopping bags, and eventually worked his way up to running stands. Michael reports that when he was growing up in the Over-the-Rhine community, there was a large alcohol and drug presence. Many of the people he knew were victims of the disease of addiction. That is why Michael sought out Santa Maria Community Services as a place of refuge.

As a young boy, Michael utilized Santa Maria’s Youth Development services, which offer life skills development as well as academic support and tutoring programs. Michael also used Santa Maria’s recreation center to relax with friends, work on his homework, and learn to play ping pong, checkers, and sports. Santa Maria was a cultural meeting place for Michael and his peers. Michael shares that at Santa Maria, “the spirit and vibe was different from any other community service organization that I had been to.” He added that Santa Maria’s environment helped his social skills and maturity. 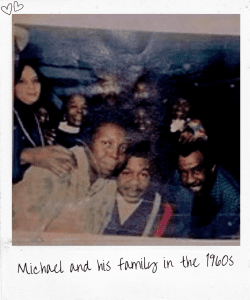 Michael met Mr. Lou, an employee at Santa Maria Community Services at the time, shortly after coming to Santa Maria. Lou ended up being very influential in Michael’s life, as a mentor, and friend. Michael said that he thought of Lou as part of his own family. Michael recalled fondly that Lou would remind him of his worth and encouraged him to do things to succeed, such as doing his homework and getting a library card. Michael was very interested in boxing at that time. He liked to practice his boxing moves and that would often land him in fights. Lou would always say, “You are better than that,” Michael recalled. This phrase guided Michael through his entire life. Lou also encouraged Michael by going to his boxing matches. In 1968, Michael won the Ohio State Golden Gloves Boxing Championship!

Santa Maria taught Michael and his family how to appreciate each other and be of service to the community. He said that Santa Maria was, “designed to be something that guided you. Santa Maria was not there to hurt or harm us, they were there to make us become an asset to ourselves and others. They cared about you as a human being.” It was that caring that helped Michael decide what he wanted to do with his life, serve the community.

Preparation through Santa Maria’s academic support and tutoring programs helped Michael attend the University of Cincinnati where he graduated with an associate degree in social work and a bachelor’s degree in criminal justice. He later went to graduate school at Xavier University for a corrections program and earned his master’s degree in theology. Michael became the Executive Director of the Garden Street Home for Men in the West End, where he gave back to the community he grew up in. Having had a mentor like Lou in his youth, Michael was excited to do the same for others. As Executive Director, Michael used his knowledge and experience of the alcohol and drug culture and prison system to help men come back into society and find a sense of stability in their community. 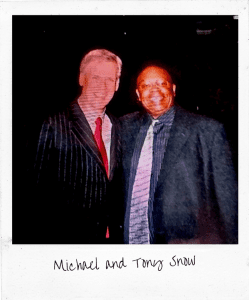 Another one of Michael’s distinct accomplishments, both personally and professionally, was a chance meeting with Tony Snow. Tony Snow was President George W. Bush’s press secretary, a former conservative journalist, and the first host of the television news program Fox News Sunday. When Michael and Tony met, Tony offered him a job with the Bush Administration on Capitol Hill that Michael accepted. He also asked Michael to address Congress on the rectification of America’s Incarceration Bill, which Michael happily did.

Although Michael has accomplished so much in his life, he still yearns for the future. He has started traveling the world and wants to continue doing so for the rest of his life.  Looking back, Michael is not sure how he would have turned out without Santa Maria’s assistance. When reminiscing on his experiences at Santa Maria, he said, “Santa Maria is an asset and a blessing.” Santa Maria is proud to have helped Michael and so many others to live their best life.