In 1997, then-Santa Maria youth social worker, Kelly Tannen, and current staff member, Brenda Merrick, led a captivating youth project in Price Hill known as “Art on the Hill.” Funded by the Hamilton County Department of Human Services, the project contributed three mosaics to Price Hill in an effort to beautify the community.

Nearly 20 years later in July 2016, Santa Maria partner and nonprofit community development corporation, Price Hill Will, along with project leader and Director of Creative Placemaking, Laura Jekel, worked in collaboration with Santa Maria to preserve and expand the tile mosaics on Warsaw Avenue.

The original mosaics located at Santa Maria’s East Price Hill locations were created by about 30 Santa Maria students. The scenes were designed by the students and placed with the help of artist Pam Kravetz. Designs included hands on the front of the Warsaw offices, the mosaic over the side door, and the panels on the wall by the once-IGA grocery store, now AutoZone, representing “Healthy Families and Safe Neighborhoods”. Eleven additional panels were created but never installed on Warsaw due to an understanding that the wall would be torn down for the purposes of opening the view of the business from the street.

Funded by the City of Cincinnati, Price Hill Will worked with ArtWorks Cincinnati, artist Lori Kay Harris-Farr, and members of the community to complete the project since titled “Tapestry: Community Woven Together.”

The dedication of the new portion of the mosaic mural was celebrated Saturday, July 9 in front of AutoZone at 3417 Warsaw Ave. Among members of the community, Price Hill Will, Santa Maria, and original project leader Kelly Tannen were also in attendance.

“It was so lovely to reconnect with the group from Santa Maria,” Tannen said. “I have very fond memories of my time working there. The new mosaics are truly beautiful and I enjoyed the opportunity to meet the people who worked on them and who made the project possible.” 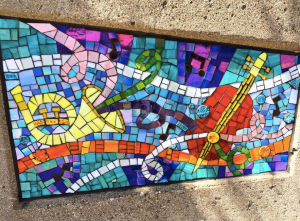